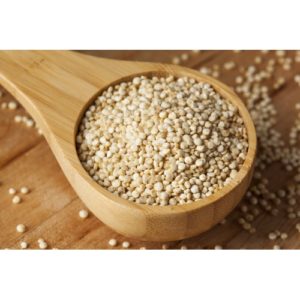 In cooking quinoa grain, you use 1:2 ratios: add one cup of the grain to two cups water in a 1-½ quart saucepan, much like cooking rice. When the mixture is brought to a boil, reduce the heat to simmer, cover and cook until all the water is absorbed.

One cup of quinoa cooked in this method takes about 15 minutes to be done. When cooked, you will see that the grains have become translucent, and the grain has germinated, having what appears like a white-spiraled tail. If you desire the quinoa to have a nuttier flavor, you can roast it before cooking. To roast quinoa grain, place it in a skillet over medium-low heat stirring constantly for five minutes. Quinoa grain has a fluffy, creamy, slightly crunchy texture and a somewhat nutty flavor when cooked.

It comes in three varieties: white quinoa grain (the most common), red and black. During the commercial cultivation of quinoa grain, much of the saponins that cover the quinoa seeds, has been removed, although it is still best to wash the seeds thoroughly before cooking to remove any remaining saponin residue. A better way is to run cold water over quinoa in a fine-meshed strainer, rubbing the seeds between your hands. To make sure the saponins have been completely removed, taste a few seeds. If they still have a bitter taste, repeat the rinsing process.

Quinoa grain is a recently rediscovered ancient crop from the Andean region of South America. A staple of the Incas, they call it the “mother of all grains”. Quinoa grain is a seed of a leafy plant like the amaranth and belongs to the chenopod family related to leafy greens such as Swiss chard, beets and spinach. Natives of the Andes believed it increased the stamina of their warriors in battles.

The protein that quinoa grain supplies are complete vegetable protein which is so convenient for vegetarians, as it has all the nine essential amino acids needed by the body, especially the amino acid Lysine, and is very important in tissue growth and repair.

In addition to protein, quinoa also contains a lot of other healthy nutrients. Quinoa grain is a very good source of manganese as well as magnesium, iron, copper and phosphorus, it is especially valuable for people with migraines. As part of your healthy eating habit, whole quinoa grain can substantially lower your risk of cardiovascular disease, obesity and diabetes.

Quinoa has low gluten content, it is one of the least allergenic grains and is very suitable for people with wheat allergies but its flour needs to be combined with wheat to make baked goods. Quinoa flour can also be used to make pasta.

Enjoy a serving of whole quinoa grain at least three times a day. You can add nuts and fruits to cooked quinoa and serve it as breakfast porridge. For a twist on your favorite pasta recipe, use noodles made from quinoa. Sprouted quinoa can be used in salads and sandwiches just like alfalfa sprouts. Add quinoa to your favorite vegetable soups. Ground quinoa flour can be added to cookie or muffin recipes. You can also use quinoa as starch to thicken your favorite sauces.