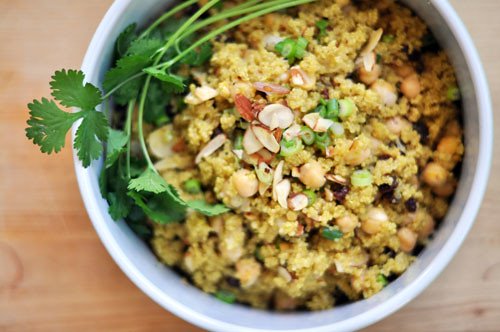 Is quinoa effective against weight loss? Is it that healthy? A lot of people were asking us that question since we launched our organic superfood store years ago. In this article, we will answer that and more.

Quinoa is getting popular in the West. Health food stores and vegans swear by this grain. And not only is it nutrient-dense, but it‘s also delicious. It has a rich nutty flavor on its own. What‘s interesting is quinoa‘s slightly puffy texture, a seed that‘s originally small and puffs out like mini popcorns once cooked.

The wonders and taste of quinoa can‘t be described in writing; it’s best to experience it yourself.

So, is quinoa superfood worth all the recent hype? Let‘s find out.

Quinoa is a seed, not a grain. It came from the Chenopodium quinoa plant from South America, which produces edible seeds instead of fruit. That‘s the reason why quinoa is sometimes dubbed as pseudo-cereal because somehow resembles barley as it grows.

And while most of us know the white quinoa variant, this wonder seed has at least a hundred types around the world. Quinoa is best known for its white, red, and black variants. Each color has a unique taste. And suffice it to say that not every bag of quinoa is created equal. Its nutrient contents and taste vary according to how and where it is planted.

White Quinoa – This is the most common variant in the market. White quinoa takes the least amount of cooking and prep time. It‘s bland enough to replace rice but tasty enough for a hearty snack.

Red Quinoa –Not only is red quinoa visually appealing, but it can also hold it is own as an ingredient. It has an earthy and nutty flavor and firm consistency that goes well with cold salads.

Black Quinoa – This variety is a favorite by health buffs. You always get to see this type of quinoa posted with greens, leaves, and spices on Instagram. The black variety has a distinct taste that differs from the white and red variants. It has a sweet and savory flavor that pairs well with just about any snack.

The best hack if you want to lose weight is to take in fewer calories. The trick here is not about reducing your food intake but about choosing the right food to take in. It‘s not about indulging yourself but nourishing yourself with the right food. Weight loss is more about the quality of food, not the quantity.

So, if you must choose between your go-to food, quinoa must make the top list. Not only is quinoa rich in vitamins and minerals, but it is also a complete plant-based protein source. Quinoa can likewise curb your hunger and keep you from overeating due to its rich fiber content. It increases your metabolism, thus helps you to burn more calories into energy.

So, if you want to lose weight, replace your daily carbs and sugar cravings with quinoa. This seed might not be as sweet, but it can surely fill your appetite and do the weight loss trick.

Quinoa gained the rare distinction as the “mother grain“ food crop since ancient times. People use to consume quinoa as a daily staple, but its price has skyrocketed in the past years. But its nutrient profile remained the same as hundreds of years ago. NASA even considered quinoa as a complete plant-food ideal for long-term space missions.

Quinoa is undoubtedly one of the healthiest foods on the planet right now. Not only can it nourish you, but it may also help to control your weight and blood sugar. So, whether you want to trim down to your ideal size or just improve your health, quinoa is the way to go. Get your pantry stocked with quinoa now, check out our store to order today.

We are now only working through Amazon. We will not process any new order through our website. Dismiss