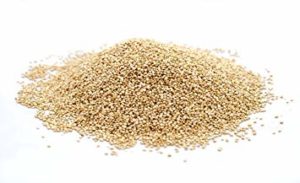 Quinoa is confusing; it’s not rice, it’s not couscous, it can be sweet and savoury and it’s also difficult to work out how to pronounce!

Cultivated in the Andes for over 5,000 years quinoa is steadily increasing in popularity due to its nutty texture and rich flavour. For those of you who care, it’s pronounced ‘keen-wah’, but whilst it’s a pretty confusing ingredient to those who haven’t tried it before, it’s also the perfect addition to the lunch box of any guy that is trying to build lean muscle using natural ingredients. Why?

Quinoa is a high protein grain that’s also calorie dense which means it’s ideal for those looking to build lean muscle. The protein it contains is made up of all 9 essential amino acids which means it’s a complete protein that will help build and repair your muscles. In addition, it only contains 3 grams of fat for every quarter cup serving and is gluten free and cholesterol free.

So yes, whilst it may be a little confusing at first, do not be afraid; quinoa should be shown a little love and appreciation because its benefits are numerous.

Much like rice pudding, adding quinoa to some freshly cut fruit and yogurt creates a delicious dessert that’s packed with protein. Try sprinkling a handful nuts on top for some added muscle building protein.

To make some lean chicken kievs or bite-sized chicken canapes, cover your raw chicken breast in a coating of quinoa, garlic, herbs, salt and pepper and bake it for around 15 minutes in the oven.

Traditionally rice would be used to stuff your favourite vegetables but quinoa works just as well – and it doesn’t give you the sugary highs and lows associated with the starchy carbs in rice.

Try mixing the cooked quinoa with some freshly fried garlic, red onions, fresh parsley, parmesan cheese and chilli. With your quinoa stuffing mix made, slice open a vegetable of your choice – aubergine, peppers and squashes work brilliantly – and stuff the insides with your mixture. Grate a tbsp of parmesan on top and bake in the oven for around 15 – 20 minutes or until golden.

This one is a bit left field but if you’re into making your own sushi you should definitely give it a try. The combination of seaweed, quinoa and fresh proteins from fish or chicken make quinoa sushi the ideal snack for lean muscle building.

To make homemade sushi, get yourself some nori sheets which you can pick up from an organic store for around £3 for 10 sheets. It’s these sheets of compressed edible seaweed that will form the backbone of your sushi.

Onto your nori place a layer of quinoa and then literally whatever else you fancy! We’re fans of avocado and prawns or salmon and artichoke – choose some high protein ingredients and have fun with it, but be careful not to overload your sushi or it’ll be break and make sure you leave a 1inch gap at the end of your nori so that you can easily seal it.

Once you’ve layered the nori, roll up the sushi rolls tightly, using a sushi mat if you like. Add a little water on the end of the nori to create a seal and roll until you reach the end. To make bite sized pieces, slice the sushi into small 2cm slices. Serve with soy sauce and some pickled ginger.

Chilli con carne is one of those staple meals that everyone seems to enjoy. With a hearty mix of proteins, carbs and nutritious veggies, anyone serious about building lean muscle should be accustomed to cooking up a delicious chilli as a mid-week treat.

But whilst most chilli recipes suggest serving it up with either a baked potato or traditional rice, why not experiment a little and use quinoa instead?

If you’re thinking of making fishcakes, ditch the breadcrumbs and switch to quinoa instead! Simply dip your fishcake mixture into the quinoa along with some fresh herbs, lemon zest and salt and pepper and bake in the oven as you would with traditional fishcakes.

Quinoa is simply BEAUTIFUL in salads. With its nutty flavour and grainy texture, it adds another dimension to what would otherwise be simple, dull dishes.

My favourite quinoa salad is Greek inspired and works really well with grilled chicken. To make the salad, mix together 1 cup quinoa, 1 small bunch fresh mint, juice of whole lemon, half a cucumber, fresh salad leaves, 4 whole tomatoes and half a red cabbage roughly chopped. The colors are beautiful and the taste is divine.

Everyone loves meat and balls. Have you ever tried grilling them on the BBQ btw? Anyway, one of the core ingredients in traditional Italian meatballs is a few handfuls of breadcrumbs which give the meatball the crumbly texture that melts in your mouth.

Quinoa works extremely well to offer this same crumbly feeling in your mouth but doesn’t give you all the added shit that white bread does!

You may not be a fan of scotch eggs. Most people aren’t – but I am! If you’re not a fan then you should be. Yes, the supermarket versions are packed with dog meat, processed breadcrumbs and an egg that looks like it’s been removed from a whale’s vagina but I make my own leaner version which tastes far better.

But even my own recipes can be modified occasionally! Instead of using breadcrumbs, switch to quinoa instead for an even leaner version of my already lean Scotch Duck Eggs.

Along with your traditional fried minced meat, ginger, garlic, soy and vegetables, why not throw in some cooked quinoa and a little sesame oil? It’s a quick and easy way of getting some extra protein into these tasty fellas.

Soups and quinoa appear to go well together but give it a try and you could be surprised. If you’re the type to go for a soup at lunch time, take a little tub of quinoa into work with you and add some heartiness to your lunch instead of the traditional carby white baguette you normally get.